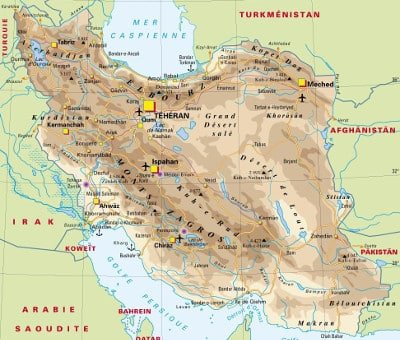 The average population density is quite low (49 inhabitants per square kilometer). Most Iranians live in centers located in the outskirts of the state or in the coolest oases inland.

Capital since 1976, its altitude is about 1200 meters and its number of inhabitants is 8 846 780 in 2011. Tehran is located in a vast plain at the foot of the Alborz. Its climate is suffocating in summer, cold in winter. Water is scarce there, and the surrounding countryside is not very fertile. Its importance came from its commercial and strategic location at a junction of high-traffic roads. It also has flourishing industries, mostly textiles and mechanical engineering.

The city of Isfahan was once a splendid and lively city, and declined as soon as Tehran had supplanted it as its capital. Today Isfahan has become an important industrial center for textiles and refining.

Elevation: 1,000 meters. Number of inhabitants 4 156 321 in 2015. The city of Mashhad, a large shopping center, is connected with Turkestan and Central Asia.

The existence of a complex hydraulic development, dating from ancient Persian times, clearly indicates that the country is largely arid. On the map, Iran appears as a vast plateau surrounded by mountainous terrain. The most imposing are the Alborz Mountains to the north (with the majestic volcanic massif of Damavand which rises to 5,771 m) and the Zagros Mountains to the southwest.

Most of the plateau, bounded by the mountain barrier, is deprived of moisture from the sea and has a dry climate. The arid and desolate depression of the interior is practically lifeless.

The most impressive of these basins is the Dasht-e Kavir (in Persian: دشت كوير), a desert of pebbles cut from salty areas. The plateau is prey to wind, drought and salt marshes.

Descended from the mountains, streams of water flow inland over a very short distance, because the hot climate dries them out as they enter the Iranian steppes.

Man needs water to live in these regions and to cultivate the land. He therefore considered building underground channels, called qanats, to preserve water from evaporation too quickly. Wherever water comes out of the ground, oases with rich market gardening crops and sturdy trees spring up. See our article on the Water Museum in Yazd.

The Iranian plateau is often interspersed with huge basins full of water, vast brackish stretches rather than natural lakes.

Crops occupy only one-tenth of Iranian soil and are distributed mainly over the Caspian Sea. Here, the humid climate favours the intensive production of cereals (especially rice), tobacco, cotton and fruit trees.

This landscape was sung by Ferdowsi, the greatest Persian poet (935-1020), who describes this landscape as a true paradise on earth.

Iranians fish consistently and fruitfully in the waters of the Caspian Sea (sturgeons).

On the plateaus, the main occupation of the inhabitants is cattle breeding (especially sheep and goats), practiced by more than 3 million nomads. The wool of sheep in the manufacture of fabrics and famous Persian rugs, traditional jewel of the Iranian industry.

Since the 20th century, a great event has transformed Iranian life: the exploitation of the first oil fields discovered in the north-west. A new era has begun for this country, which was hitherto extremely poor, devoid of industry, with little means of communication. The enormous wealth that oil brings to the state’s coffers is largely used to improve the country’s living conditions.

Production is growing rapidly and reaches 182.6 million tonnes per year (in 2015). A magnificent river port was born: Abadan (206,073 inhabitants in 2009), where oil arrives by pipeline. The precious fuel is distributed worldwide.

The Iranian economy has been penalized for a long time by the US blockade, but it has been gradually lifted since the Joint Comprehensive Plan of Action on Iranian nuclear energy on 14 July 2015.