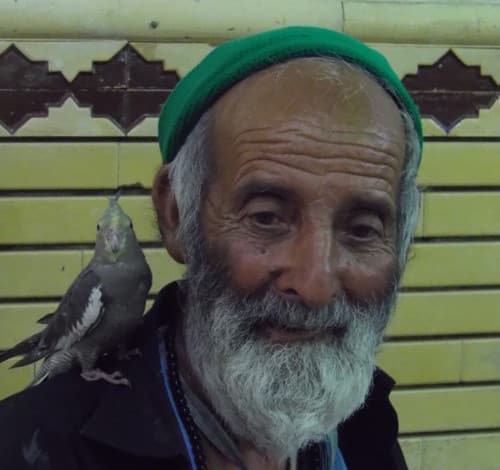 Our meetings in Iran have been far removed from the image that Westerners can have of the country and its inhabitants. The Iranians are friendly and we are easily accosted on the street to ask about France, our family life (number of children, boys and girls, …) or international politics. The theme of Daesh and the massacre at Bataclan have come back regularly and often with the conclusion: “At least in Iran, you are safe and it is good to live. Welcome to Iran”.

We have found that globalism has not spared Iran. In spite of poor internet access and a blocked Facebook, Iranians are fully aware of the world news. Certainly we went to big cities. Most of the Iranians who came to us were the most curious, those who knew English, in any case enough to exchange a few words.

We have not seen extreme poverty during our journey. On the contrary, we also have no memory of noticing people spreading their wealth. Iran seems to have an important middle class. To rub shoulders with the Iranian high society, we would have had to go to the island of Kish, the high place of entertainment of the Iranian high society. We had thought about it but we did not have enough time and perhaps not the financial means.

The only people who seemed unapproachable to us were the imams. Unlike the rest of the Iranian society that came to us driven by the curiosity of the West, they crossed us with all indifference.

Place of women and wearing the veil

The place of the women seemed quite contrasting to us. The couples we met seemed to have a balanced relationship. We see regularly on the banks of the river Zayandeh Rud Of Isfahan, young couples of lovers holding hands. We are thus far from the caricature image of the submissive woman, walking completely veiled, behind her husband.

It should be noted that unlike the neighbouring Arabs, women are present in the Iranian parliament even though Iran is still far from parity – 18 women out of 190 parliamentarians in the last elections.

The wearing of the veil is compulsory, imposed by the religious authorities. We’re not joking with the veil in Iran. One day, Christine had dropped her veil in our taxi in Isfahan. Our driver panicked asked her to put it back immediately, lest he be arrested by the police.

The wearing of the veil seemed to us to be more affected by Iranian society than claimed, in contrast to their Arab neighbours. In the plane that brought us to Isfahan, no woman was veiled. All these women were veiled after the landing.

In the desert, our driver proposed to Christine to remove the veil without it shocking anyone even a cohort of military that we crossed at Caravanserail. There is, indeed, no sailing police in the wilderness.

The way to wear the veil reveals the level of religiosity of the person. Worn in an integral, black color, it reveals a person applying strict religious rules. On the contrary, a wearing of brightly colored sails, leaving an important part of hair on the front, denotes a modern and open mind to the Western world. This is often the case for young people, but not always. We met many young girls wearing a traditional black veil. The latter were particularly endorsed, interrogative as to our interest in their country. In Iran, it is not because a woman is veiled that she is necessarily associated or backward. In the West, on this subject, the shortcut can be quickly done.

We had the feeling that two companies were rubbing shoulders. Civil society, with an aspiration to a rich economic, cultural life and a society led and organized by the religious. A common denominator for these two groups, the sense of belonging to the same society, the Persians.

The religious need civil society to run the economy. Civil society aspires to an area of freedom. In 2009, the religious went too far, creating important street demonstrations. The first green revolutions started in Iran. The power has receded and a dividing line between civil society and religious power has been established around the veil.

The Cult of martyrdom

The concept of martyrdom is very present in Iran. Great portraits of the deaths of the Iran-Iraq war (1980 – 1988) are displayed along the roads. Mausoleums to the glory of the disappeared, are present in the city. We went to visit one of these souvenir houses in Kashan (right next to the Tabatabei House).

This concept of sacrifice is very present within the Shiism, a variant of Islam and dominant in Iran. When we attended the prayer ceremony in the mosque in Shiraz, the men were beating their breasts in remembrance of the sacrifice of Imam Hussein, one of the first martyrs of the Shiism. Today, millions of Shiites go every year to Karbala, the holy city of Iraq, a hundred kilometres southwest of Baghdad to commemorate the decapitation of Imam Hussein.

The image of Iran in the world

The Iranians are astonished and wonder about the image of their country being conveyed by the media abroad. They are, in fact, assimilated to terrorism by American and Israeli propaganda. The Iranians explain to us that, on the contrary, they are a quiet people, aspiring to live in peace. The Iranian people are Persian, not Arab. It has nothing to do with the terrorism of Daesh, financed by their neighbours in Saudi Arabia and the Qatar. It is certain that westerners do not make the difference and by ignorance, assimilate the Persian people, the Arab people, Iran and terrorism.

In conclusion, apprehending Iranian society in 15 days is pretentious exercise and impossible to achieve. We just got the feeling from our point of view as a simple tourist, a peaceful society, people who take pleasure in picnicking in the middle of the city, of a country where it is good to live. We did not see any police, not even on the streets while the traffic was crowded.

So to take up the slogan of the video of the Toltips :

“You could spend the best vacation in your life”