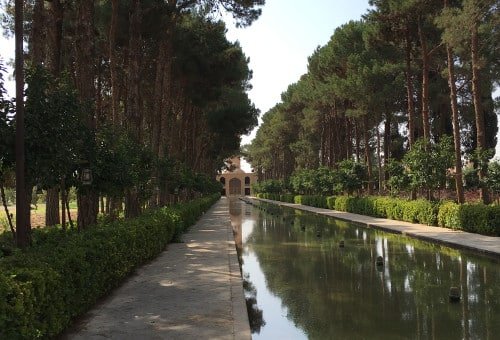 The gardens are real works of art. These are places where Iranians enjoy themselves. The water circulates in these havens of peace, brings the freshness that soothes. Indeed, this element has a central role for both the aesthetics of the places and the irrigation. The peculiarity of the Persian garden is to symbolize paradise. The Iranian gardens have been a source of inspiration for the world famous gardens in India or Spain.

We visited in particular :

The Desert of salt (Dasht-e Kavir) and the desert Dasht-e read are the main desserts of Iran. We discovered the salt desert (200 000 km²) thanks to our guide. We went there at the end of the afternoon because the temperatures are unsustainable. The desert is very little populated by the population. We discovered a single man with his watermelon production. At the bottom of a bored without water, it grows the watermelons. This product is welcome to refresh. He also showed us his well to extract the water.

After long kilometers through the dunes and desert landscapes, we won the caravanserai, the place of supply of the caravans of merchants and halt.

Then we took advantage of the night to watch the starry sky, then the sunrise.

The bazaars are beautiful places to soak up the ambience of the city. It is also a place of appreciable freshness.

In fact, the vaulted ceiling insulates temperatures and a light hole helps to illuminate the spaces. It’s also a way to cross the city on foot. These aisles give directly to some mosques and hammam.

The kebab with rice remains the most consumed menu.

We were able to taste the famous dizi called Abgoosht (popular dish). The Abgoosht must simmer for a long time. It is divided and served in two parts. First, the broth that is placed in a large bowl served separately. Then, the solid ingredients, the meat, the potatoes, the tomatoes, the chickpeas and the white beans. They can also be crushed using a mortar.

The ash is a very popular soup in Iran. It is made up of dry vegetables, herbs and small pieces of meat.

The gas of Yazd is a delicious nougat fondant with pistachios.

Chimney square and covered with vertical slits that capture the wind. Traditional element of Persian architecture that allows to ventilate, refresh buildings and store water at extremely cool temperatures.

Each time a low wind blow passes through the top of the wind sensor, the height difference creates a small difference in pressure between the base and the top of the inner column of the Badgir. The pressure difference therefore helps to raise the warm air to the top and bring fresh air to the bottom of the column. Coupled with the properties of the raw Earth, this increases the resistance qualities to the heat transmission.

We have seen the presence of very many badgirs in the cities of Yadz and to Kashan.

The Qanat is a work (mining type) intended for the capture of an underground water table and the supply of water to the outside. A qanat consists of a set of vertical wells (access, aeration) connected to a slightly sloping drainage gallery that routes water to tanks. The openings of the 20-30-metre distant vertical wells are consolidated on the surface by dried mud. So you can see the course of the gallery. For populations of arid or semi-arid regions, a qanat is a constant and steady source of water, regardless of the season.

The horizontal galleries, 80 cm tall, can be several tens of kilometers long.

The Water Museum in Yazd Describes the entire system of pipelines put in place by the Iranians to bring water to the villages.